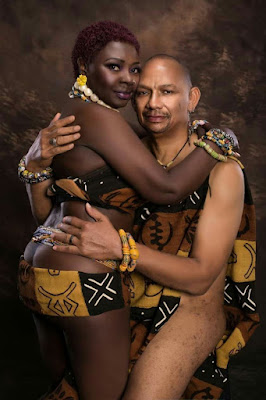 Ghanaian Highlife legend Ben Brako and his wife are breaking the Internet with a semi-nude photoshoot of themselves.
Bedecked in heavy African beads, the 66-year-old ‘Meko Mekrom’ hitmaker and his wife are captured in a risqué shoot of themselves half-nude in a warm hug with their most vital parts only covered by a colorful African cloth.
Mr. Brako posted the picture on his Facebook wall with the following text: “To Kofi Nyaako, and others who only see this as titillation and nakedness instead of the beauty, artistry and African high culture that it truly represents, this is for you as well”. 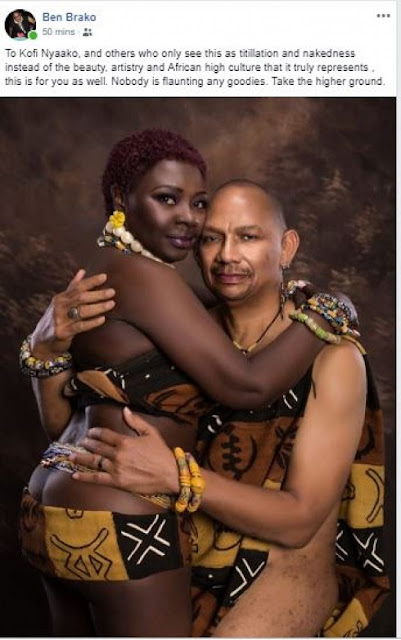 “Nobody is flaunting any goodies”, he added, saying: “Take the higher ground”.

Ben Brako was born on 20 May 1952 in Accra, Ghana and took an active interest in the music and entertainment world at a very young age, and yet he is one of the few musicians who took his education very seriously.
He had his secondary education at St Augustine’s College in Cape Coast. He holds a Bachelor of Science in Agric Economics from the University of Ghana and also obtained a B.A. (Hons) in Media Communication Studies from the University of East London (1994).
The photoshoot has become the toast of social media since he posted it on his wall.
Classfmonline