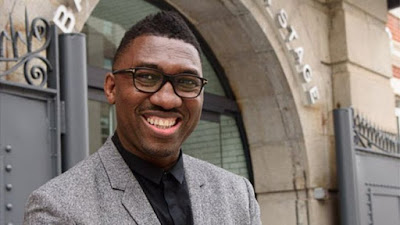 Another Ghanaian aMaking Ghana proud. you need to read this….
“Award-winning director and playwright Kwame Kwei-Armah has been announced as the new artistic director of the Young Vic theatre in London.

The former Casualty star said he was “beyond humbled, if not a little scared” to be appointed.
“To walk into the Young Vic is to come face-to-face with everything I love about theatre,” he said.
He will succeed David Lan, who is stepping down in 2018 after 18 years in the role.
Kwei-Armah added: “To lead this magnificent theatre at this time in our nation’s history, after such a visionary as David, excites me beyond words. I can’t wait to get started.”
Kwei-Armah, who was made an OBE in the 2012 for services to drama, is currently artistic director at the Baltimore Centre Stage in the US.
He will announce his first season of work as Young Vic artistic director in the new year.

Last year he gave a speech lamenting the “sinful” lack of black artistic directors in British theatre.
He was speaking at the British Film Institute in London on a visit from the US to direct One Night in Miami at the Donmar Warehouse. It went on to be nominated for an Olivier Award for best new play.

Patrick McKenna, chair of the Young Vic board, said they were unanimous in their choice.
“Kwame’s wealth of experience directing, writing and working with the local community in Baltimore and beyond will translate beautifully to his new role leading the work on the Young Vic’s three stages as well as its pioneering outreach and education work in London.”

Kwei-Armah is currently in rehearsals at the Donmar Warehouse, where he is directing Ibsen’s The Lady From The Sea. “