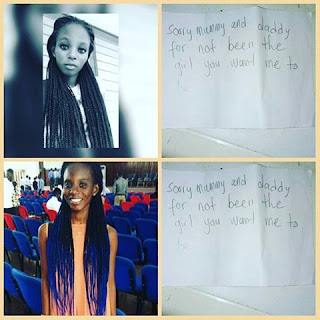 An 18-year-old Adwoa Agyarkwa Anyimadu- Antwi , a student of the Kwame Nkrumah University of Science and Technology in Kumasi, was found hanged in a hostel Friday morning in what is suspected to be a suicide. The deceased is the daughter of the Member of Parliament for Asante Akyem Central, Kwame Anyimadu-Antwi, and was a first year student of the university where she was studying chemical engineering. Her body has since been deposited at the KNUST Hospital. A family source who confirmed the incident to 3News Friday evening declined to give further details. Unconfirmed reports say she hanged herself because she could not endure the stigma of having failed one subject.
Adwoa was said to have left a suicide note in which she apologized to her parents for not being the kind of girl they wanted her to be. By 3news.com

” What pushed the young student to hang herself remains a mystery.

So in Ghana, if you have suicide thoughts, which organisation do you call?

In the UK and other advanced countries, there are countless Charities such as the Samaritans to seek help from if depressed or if you have suicide thoughts.

Of course, people kill themselves everywhere but these bodies prevent a lot of suicides—do we have any of them in Ghana?